As I sit here at my desk, the cuckoo is lamenting “Meitjie, meitjie, meitjie” . That would be the Classless Cuckoo, with a gap in his front teeth, and flashing a ‘hang loose’  hand signal,  as our family legend has it.

You will know it as the Klaas’s Cuckoo, and tell me that they don’t have front teeth. Either way, they often sound out their call of the jilted lover  as the sun emerges after a few days of cool and rain.  With that rain, and coolness, us flyfishers are all thinking of heading to the hills to get on a trout stream.

Three writers from my fly fishing library spring to mind when I mention the Dog days of summer.  Firstly , Ted Leeson, (whom I rate as one of the finest writers on flyfishing ever), explains the “dog days” term, its reference to the rising of the star Sirius aside the sun during the late summer in the Northern Hemisphere. The Dog star, as it is called, rising along with the sun, supposedly adds to the heat of the day, and thus the hottest days are “The Dog Days of summer”. He has a delightful chapter on this in his book “Inventing Montana”, in which he describes the sultry hot days of their American summer from the perspective of a holidaying flyfisher.

Across this side of the Atlantic, I reckon we trump the Americans in terms of heat, and thus true dog days, even though we don’t have the synchronicity of Sirius to add to the steaminess of the affair. Perhaps it is in fact no hotter here in January than it is in Ennis in August, but since I am the one sitting here sweating, I will claim the warmer ground. In his first book, our own finest writer, Tom Sutcliffe says  “concentrate your fishing on early morning and late evening…… and put your feet up for the in-between time.”    That is a line that was punted just last week on our local club chat group, and I paused a moment to contemplate how nothing has changed since Tom wrote that line above in 1985.

In fact, nothing has changed much since Oliver Kite wrote “ one morning in late July it was so hot that I left my jacket in my car“  in 1963. He was writing of the UK of course, and in this trilogy I would imagine he might be the least qualified to write of the dog days of summer, given that last year Hampshire’s highest summer temperature, according to Google, was 21 degrees, and the highest in the last 5 years was 25 degrees C.  Here in SA our jackets are locked in a trunk for the summer! 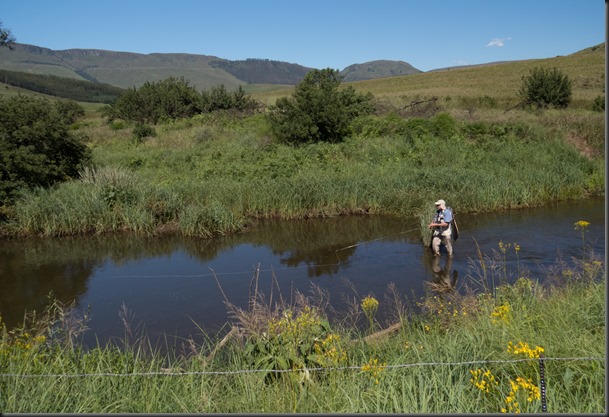 But Kite writes not so much of heat, but rather of depleted fisheries, and thoroughly fished-over trout.  We are lucky not to have that problem in my neck of the woods.

We do however have the rank growth on our stream banks, which Oliver Kite writes about, and we have the heat, which Leeson sums up beautifully as follows:  (and I will end with this, because putting down a piece with Leeson’s words knocking around in your head is just special)

“ But when Sirius wanders in, circles once around southwest Montana, then lies down, curls up, and goes to sleep, the smothering weight of heat and airborne dust cannot be wished away. I number these among the least habitable days of the inhabitable narrative , a recurring leitmotif that grows heavier the longer it hangs around. The story of your fishing has nowhere to go because the main characters refuse to speak. Back at the ranch, there are iced drinks all around and much talk of the weather”